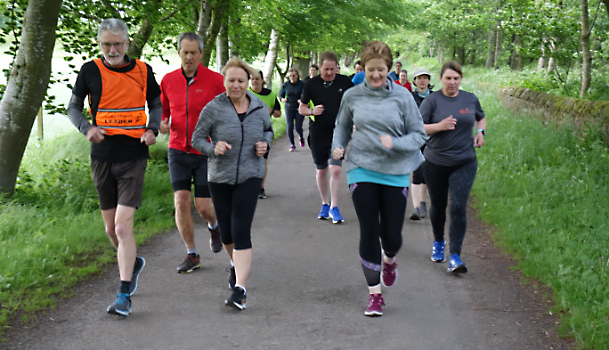 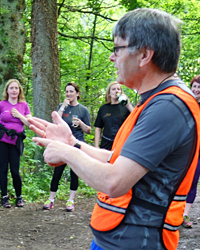 Malcolm is our principal leader. He began running when he was in his twenties, and took part in the third ever Great North Run. He gave up when twins came along and, over the next thirty years, became heavier, started to take pills for high blood pressure, and was on his way to real problems. In February 2012, he decided not to just sit back and go to an early grave. He made the decision to lose weight.

Looking around for ways to do that, he stumbled upon the NHS Couch to 5K programme. Nine weeks later, he was jogging/running for half an hour and had entered his first 5k fun run.  Since then, he’s become hooked.  In September 2013, he completed the Great North Run - thirty years after his first time.

Although he started out at 97kg, he lost an amazing 30 kilos (almost 5 stone). He still counts his calories every day. But knows that the occasional treat does no harm - especially since you can run those calories off!

He is a fully qualified UK Athletics coach. Oh - and one more thing - in 2015 he completed his first ever marathon, at the age of 60! 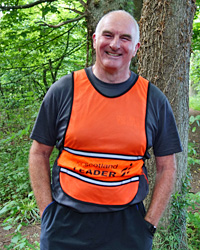 Rod joined Get Fit Falkland in October 2014 after realising he could not keep up with his young daughter as she practiced for her school sports. Having previously been a regular Hillwalker and Fun Runner, solo attempts to regain that fitness came down to over doing it and ending up scunnered!

The gradual approach of the GFF program along with the group atmosphere ensured he completed the program and transitioned to Falkland Trail Runners.

As well as getting fitter Rod has lost 16Kgs and whilst he has no expectations of being a race winner he enjoys the personal challenge of participating in events including 10K at the Cape Wrath Challenge, FTR Lost Trails, FTR Dirty Weekend, The Tiger Escapade, FTR Frostbite Series and the East Fife Triathlon. In 2016, he undertook the ultimate running challenge - he completed his first ultra-marathon!

Get Fit Falkland and the Falkland Trail Runners have given him the ability and motivation to fulfill challenges which he thought he'd never see again. 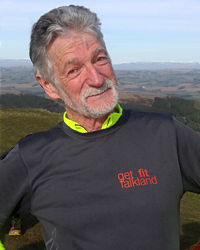 Bill and his partner Teri were persuaded by a friend to come along to Get Fit Falkland in January 2014. We didn't know it at the time, but he was about to start a new activity that would change his day to day life.

Bill retired in 2016 and now has time to spend doing what he loves most. Playing a wide range of musical instruments. Keeping an equally wide range of animals - a dog, some ducks and chickens and a pair of goats. And running.

He’s become quite competitive - definitely the fastest jog leader in the area! 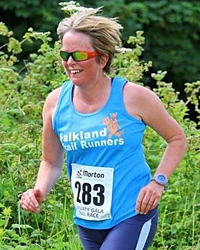 Nessie has run on and off since her early twenties, first for fitness to do her job, and although that’s partly true today, she now runs because she just likes running..... a lot

Nessie likes exploring tracks and trails, and just being out and about. The "on and off" bit means she's been a beginner more than once. So she knows what it’s like to think running for 5 minutes just won’t ever happen! However, Nessie’s been very much involved in Falkland Trail Runners since completing Get Fit Falkland herself 3 years ago, and has taken on some longer distance running challenges that she’d never imagined she’d do before, including the Cape Wrath Challenge twice and The Dirty 30.

Despite all the miles run and the mud ... she says she’s happy being more of a running penguin than a speedy gazelle. 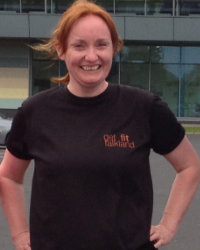 Carolann has gone through both our Couch to 5k programme and the 10k one. She’s now aiming for a half marathon! Carolann does an amazing job of accompanying and encouraging our less confident members and even organises some extra informal sessions to help them build up their ability.

If you need someone to talk to and share your doubts and worries, Carolann is the most patient of people! 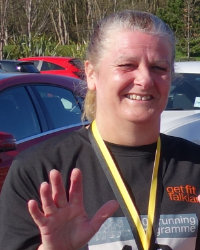 Linda is so keen to get people active that she’s made sure all her family have completed Couch to 5k!